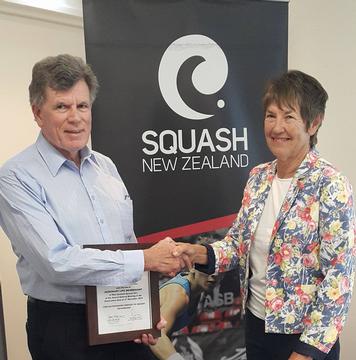 At the Annual General Meeting held on the 4th December 2016 Peter Highsted of the Tawa Squash Club was elected to Honorary Life Membership of New Zealand Squash for outstanding service to squash refereeing.

Many people will know Peter and his contributions to the sport of squash and in particular refereeing. Jan McAra provided the following summary of Peter's contributions:

With more than 40 years’ experience refereeing squash at all levels, Peter Highsted is one of New Zealand’s most highly-regarded and respected referees.

He has made an immense contribution to the sport over the years and is an eminently suitable person to be honored as a Life Member of Squash New Zealand.

Peter first started refereeing in 1975, and quickly progressed through his refereeing qualifications, before eventually being appointed as a World Referee in 1994, a role he served in until 2003. He continued to play an active role in officiating the sport right through until his retirement in 2015.

During the course of his refereeing career, he has refereed more than 2000 matches and officiated at 21 world events, including the 1998 Commonwealth Games in Kuala Lumpur. As a referee, he was known for his grace, fairness, and even-temper as well as his thorough and well-versed knowledge of the rules.

Peter has also played an active role in squash at a local level, as a player, administrator and referee. He has been a member of Tawa Squash Club since 1971 and has always been generous with his time and expertise, not just at his own club but also at other clubs around the district. His service was recognized by Tawa Squash Club when he was appointed a Life Member in 1998.

Awarding Peter the title of Life Member of Squash New Zealand, would be a worthy and deserved way to recognize his achievements and commitment to the sport.

The sentiments and summary of Peter's achievements are further exemplified by current life member Susie Simcock who said:

Peter Highsted is a committed, long-standing and respected referee, who I have known for much of his refereeing career.

Over a long period of time, I attended many of the same events in New Zealand as well as numerous World Squash events where Peter officiated.

It was always a pleasure to see a fellow Kiwi doing a great job on these occasions. He represented New Zealand with pride and achieving elite WSF recognition with International and World Referee status over a significant number of years.

I am delighted to support Peter's nomination for Life Membership of Squash New Zealand.

James Smith of the Tawa Squash Club was able to further support this membership by stating:

As the current President of the Tawa Squash Club, I would like to offer my strongest possible recommendation that Peter Highsted be awarded a Life Membership of Squash New Zealand.

Peter has been a highly valued member of the Tawa Squash Club since 1971. As a player, administrator and most notably, official, Peter has been a constant source of pride for the Tawa Squash Club. He was awarded a life membership in 1998 and has continued to be a loyal and active member beyond his playing years. Peter is regularly involved in club events and has always been generous with his time and expertise.

Having also known Peter as a player (and while squash players never really agree with the officials), I can attest he is a highly regarded and respected official whose consistency, fairness and good grace has made him one of the best referees New Zealand has had over the course of his 41 year refereeing career.

Peter is a true gentleman and his contribution to squash in New Zealand is immeasurable. It is an honor to be able to endorse him for this prestigious title.

We congratulate Peter on his achievements and a full list of his contributions to squash at the highest level can be found below.

Record as a Referee