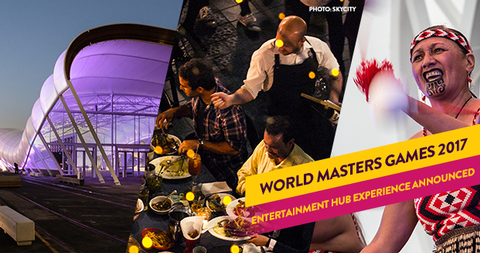 Squash Players competing at World Masters Games 2017 will have access to exclusive athlete only social events on Queens Wharf as part of their Games registration package.

With exactly six months to go until the Games commence, the Local Organising Committee has announced plans for the Queens Wharf Entertainment Hub with plenty on offer for the public and some exclusive extras for registered Games particpants.

The Wharf will be home to a programme of arts, performance, food and culture throughout the Games. Activities will include pop-up food experiences, special demonstrations, a family zone, comedy performances and plenty of music from jazz and swing to rock and hip hop.

“It’s a great opportunity for our local Squash players to meet and socialise with their fellow competitors from all around the world, as well as involving their families and friends in the Games,” O'Grady says.

“As well as being able to enjoy the public programme at the Entertainment Hub, squashies will receive access to two athlete only parties in The Cloud and the Closing Ceremony on the Wharf as part of their Games registration package.”

The first athlete only party on Saturday 22 April, will have a superhero theme and participants will be invited to come dressed as their favourite superhero, while the second party, the following Saturday, will give participants the chance to roll back the years with a ‘Saturday social’ theme.

The Entertainment Hub will also be the venue for a number of medal ceremonies during the Games and will host a nightly wrap up of Games competition.

The forecourt of Queens Wharf will be part of the Entertainment Hub but will also double as the start / finish area for the athletics half marathon, road race and 10km, and cycling time trial.

“The announcement of the Entertainment Hub is the last piece of the World Masters Games 2017 puzzle so all squash players now know what is on offer from both a sporting and social point of view at the Games,” O'Grady says.

“Now is the time to commit and register for the Games if you haven’t already.”

Access to the athlete only events on Queens Wharf are included in all registrations packages, with gold packages also providing exclusive access to a Gold Lounge at The Cloud.