Tough Losses for King and Hawkes 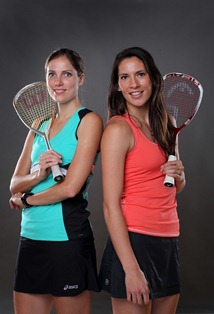 NZ's number 1 and 2 squash players, Joelle King and Jaclyn Hawkes have lost their opening round singles matches at the strong US$50,000 Cleveland Classic, after earlier winning through qualifying.

Fresh from reaching the Greenwhich Open final in Connecticut, Joelle King had a tough start in qualifying, where Latasha Khan (United States) took her to five games, although the Kiwi came out strongest with the 3-2 win. King, who is ranked 11th in te world, then defeated Delia Arnold from Malaysia in straight games 11-7 11-6 11-6 to take her to the main draw, where she drew the tournament top seed and world number one Nicol David (Malaysia).

In the five-plus years that David has reigned the female squash world, she has rarely lost, yet the kiwi girl from Cambridge came seriously close to inflicting a rare defeat on her Malaysian opponent. In an epic 63 minute match, King had the World Champ at 2-2 and was up 7-5 in the fifth set before David showed her strength and took out the next six rallies straight, taking the final result to 4-11 9-11 11-9 11-8 7-11.

Both girls have a bit of a break before their next match, so it will be a great opportunity to reflect on their close calls and put plenty of practice in.