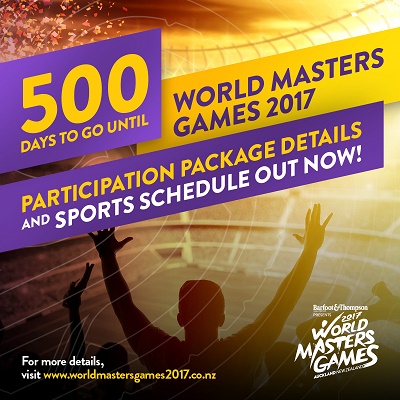 The World Masters Games 2017 sports schedule, including the competition dates for squash, were announced today along with the all-important registration packages available to athletes and supporters.

Squash New Zealand’s Chief Executive Jim O’Grady said the announcements, made on the occasion of 500 days to go, allowed participants to move into planning and preparation mode prior to registrations going on sale in February next year.

“Auckland is the place to be in April 2017,” he said.  “It’s the first time the World Masters Games have come to New Zealand.  We are the host country, so now’s the time to step up and take on the world, on our own home turf.”

The World Masters Games 2017 are the world’s largest multi-sport event for amateur athletes of masters’ age.  The event represents an unrivalled opportunity to compete on a world stage, seriously or socially, with athletes of the same age and capability.  With minor exceptions, no qualification is required.  Anyone of masters’ age can take part.

The event fees, announced today, offer athletes a choice of three different packages – Bronze (NZ$295), Silver (NZ$395) and Gold (NZ$825).  All three packages include participation in one sport (with the option of adding other sports as Games schedules allow), admission to the Opening and Closing Ceremonies, accreditation pass, official backpack and Games guide, as well as access to participant-only social events at the Games entertainment hub for the duration of the 10-day festival.  Supporters can also sign up, at reduced prices.

For more details of the sports schedule and registration packages visit