Ross Norman achieved fame and glory (as well as becoming the answer to a popular pub quiz question) when he ended the incredible 555 match unbeaten run of Pakistani legend Jahangir Kahn in the 1986 World Open final. Norman had been ranked No. 2 in the world behind Kahn for some time before his watershed win, without ever being able to end the Pakistani's dominance of the sport. However Norman doggedly kept at it, famously saying "One day Jahangir will be slightly off his game and I will get him". This undoubted highlight of Norman's career nearly didn't eventuate after a parachuting accident in 1983 resulted in a badly injured knee, and doubts that he would ever play squash again. To come back the way Norman did is testament to his determination and drive. He continued to excel on the international scene until 1995, when he was still in the world's top ten players (and NZ No. 1). During his illustrious career Norman represented his country on many occasions between 1978 and 1993 - a truly remarkable career. 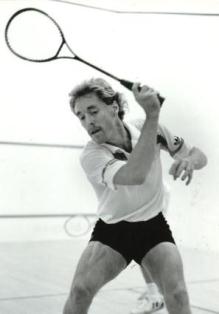