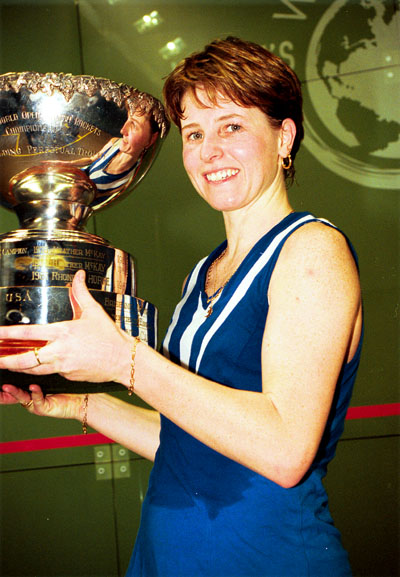 Carol Owens  has been referred to by Joseph Romanos - author of Long or Short? The Story of New Zealand Squash - as 'Australia's Gift'. A talented junior growing up in Melbourne, Australia, New Zealand's first introduction to Owens was the 1989 World Junior Championship at Hamilton, where she finished third.

Owens progress through the senior ranks was initially difficult and paved with obstacles. Not only Susan Devoy, but also two brilliant Australian players in Michelle Martin and Sarah Fitz-Gerald, provided stiff competition among the top echelons of the world rankings. However, determination and perseverance paid off for Owens, who eventually climbed her way towards the top.

After representing Australia for the last time at the Kuala Lumpur Commonwealth Games (where she won a bronze medal in the Women's Doubles with Fitz-Gerald), she was faced with the possibility of premature retirement due to a heart condition. However, a successful surgery enabled her to return to the circuit. By this stage Owens was spending increasing amounts of time in Auckland, where she enjoyed working with coach Paul Wright and was a proud member of the Eden Epsom club. She underlined her return to international squash with a world title in 2000, beating Leilani Joyce in the final after being down 2-0 and 7-0 in the third set.

By 2001 she was eligible to represent New Zealand. After winning back to back national titles, she represented New Zealand with distinction at the 2002 Commonwealth Games, winning silver in the singles and and gold in the doubles with Joyce. If that didn't thaw Kiwis' hearts to her, the number one world ranking she held at various times between 2002 and 2004, and the second World Open title she collected in 2003 (her first as a New Zealander) certainly did.

Since retiring Owens has remained in Auckland doing a great deal of coaching.